Its been a very long time since I last updated this blog (I’ve been more active on instagram over the last year) but I’ve been wanting to revive the blog for a while- now that postgrad study is complete, I thought I’d give it another go!

So… the last year has been a pretty busy one (hence no posting). Here’s an update on some of the projects I had the opportunity to work on:

Last year was spent studying hard to get postgrad qualifications in illustration, specifically medical illustration. What an amazing year- it was a huge learning curve, but at the same time, it went super fast. I was lucky enough to work in the Design for Health and Wellbeing Lab (a design for health studio based in Auckland City Hospital) to carry out my illustration honours project. Here is a post about my research project (and in more detail here).

I might do a more in depth post about my research and some of the interesting things that came out of it at some point. 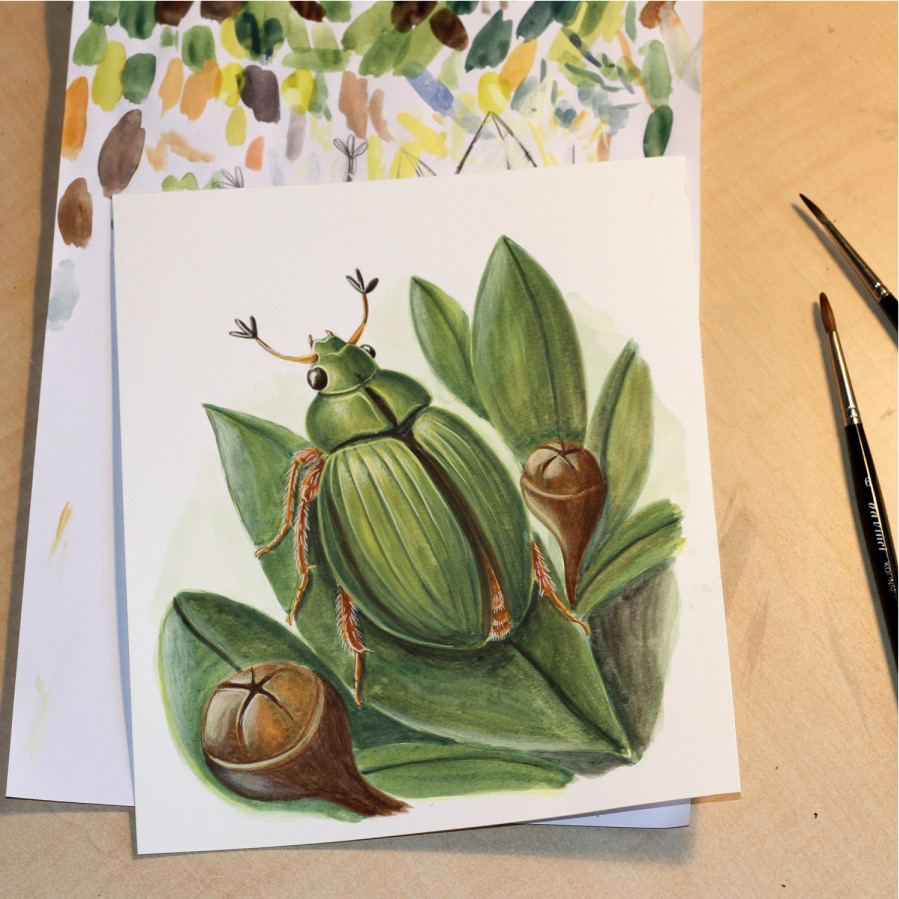 Alongside studying, I was lucky enough to work on a really fun illustration project with entomologist Leilani Walker, illustrating 52 native New Zealand insects (and designing packaging) for the Insects of New Zealand Playing Cards. You can read more about the process for making these illustrations here. It was such an awesome project to be involved in, (probably the biggest and longest lasting illustration collaborations I have worked on) and the support for the cards now they have been released into the wild has been great- in fact, we have just released the second edition last month!

Since I completed my studies I have been transitioning into freelance illustration work. While I had been doing freelance projects for the last couple of years, treating it as a serious full-time business and actually calling myself an ‘illustrator’ has been a big step. Lots more learning and developing processes of working (and administration!), plus a newly designed website, which you can see here, and a sparkly new Etsy store too!
Both still a work in progress. I’ll start posting more about some of the projects I HAVE worked on soon. Next time, back into regular posting with something (hopefully) a bit more interesting 🙂

If there’s anyone out there reading this, thanks if you are still following this blog- I appreciate it!

Just quickly popping in to say hi and share these beautiful illustrations by Cliff Whiting from the maori childrens book Pūrerehua (Kahukura) by Hirini Melbourne, which is about the life cycle of the NZ Red Admiral. I thought it was quite fitting to share these today as we come to the end of Te wiki o te Reo Maori (Maori Language Week) here in NZ!!

Have a lovely weekend everyone!

I posted earlier this week on instagram that I would be releasing this ‘Seals of New Zealand’ colouring-in sheet as a free download on the blog- and finally its ready!

Inking done on SEALS OF NEW ZEALAND poster! Stay tuned for the colouring in page which will be available for free download on my blog later this week 🐧🐳🐡 #nature #newzealand #pinnipeds #seals #naturalhistory #SciArt #ink #rotring #illustration #art #biology #scientific

I thought it might be quite a fun and useful educational resource , as I don’t think the species of seals we have in New Zealand is very well known to the majority of people (myself included before doing this little project). 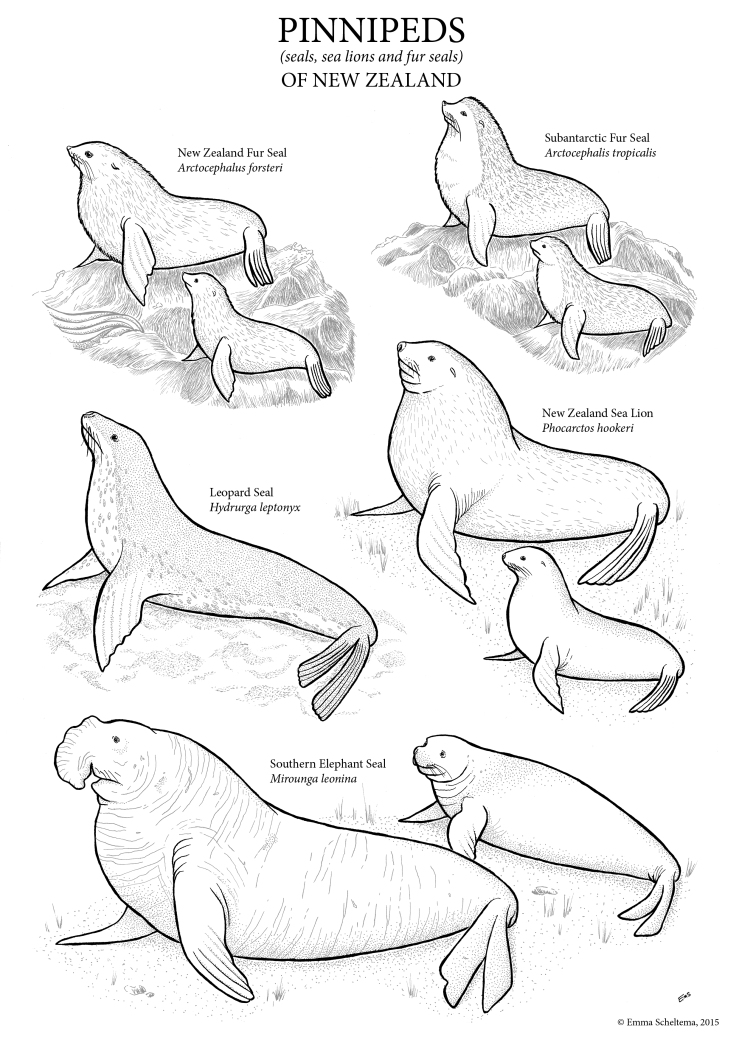 END_OF_DOCUMENT_TOKEN_TO_BE_REPLACED

recently I have been practicing more and more on digital painting techniques, trying to see if I can emulate the look of traditional media in photoshop (which I am finding quite challenging!). I really don’t like the CG look, so its an interesting challenge, which I can tell is going to take a lot of practice to master.

Here is my first entomological digital “painting”, of a NZ chorus cicada (Amphisalta zealandica). As we move into the colder weather here in New Zealand, these guys have been disappearing.

This started off with sketches in real life, scanned in, then added digital paint over the top. The wings were also rendered with highlights, which you can only see on a darker background:

In other news, I was lucky enough to attend Chromaconnect (NZ’s only industry conference for creative fields like illustration, concept art, animation), last Friday. It was amazing, I took lots of notes and will be writing up a post with some stuff I picked up there to go up later this week for anyone who is interested!

This months Natural History Artist is Piers Hayman. I first heard about him through New Zealand Bird Rescue, a charitable trust of which he was a founding member (then the NZ Wildlife Rehabilitation Trust). Originally from England, and trained as a graphic designer, he emigrated to New Zealand in the early 80’s.

END_OF_DOCUMENT_TOKEN_TO_BE_REPLACED

On my recent trip up north to Russell, we made a stop along the way at Waipu, where they were having an antiques show. They had all sorts of fascinating things- old books, fountain pens, sewing machines, vintage postcards… but what caught my eye were these vintage Air New Zealand menus, because of the beautiful bird illustrations on the covers. I bought a couple for a few dollars each, and have framed them (in some repurposed frames from the op shop). It turns out the illustrations were done by NZ artist Bruce Harvey (one of the best known NZ artists of birds), between the years 1976-79. 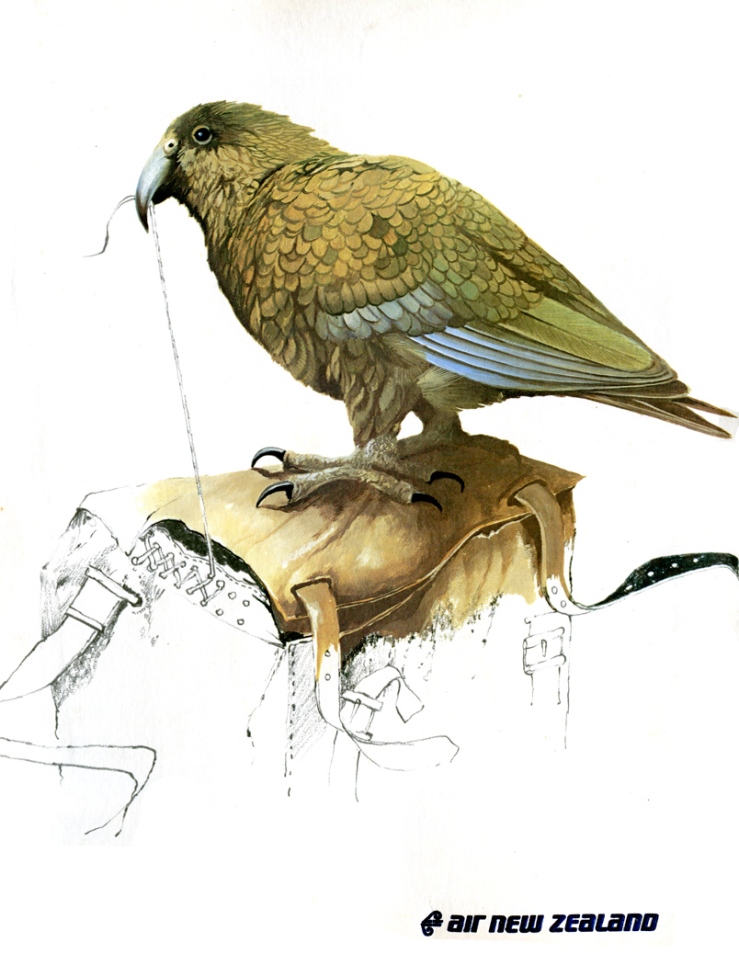 END_OF_DOCUMENT_TOKEN_TO_BE_REPLACED

here is a watercolour painting I just finished yesterday- it is of a North Island Weka (Gallirallus australis greyi), like the ones that I managed to sketch and photograph on a recent trip to Russell.

I have heard that the North Island Weka is more endangered than the Kiwi- so a pretty special thing to see in real life!

I used a limited palette (the majority of the bird is just painted with ultramarine blue+ burnt sienna- my favourite combo!) and tried out some new-to-me watercolour paper- plain hotpress Fabriano paper (the paper itself didn’t have a name) which was pretty good but hard to remove mistakes without ruining the paper, which I guess is to be expected from a cheaper paper!

I also just wanted to mention an interesting interview I listened to on the weekend by Nick Patton (from the Picturebooking podcast), who interviewed Katherine Roy– an illustrator of kids natural history picture books. Its a really interesting listen for anyone who is interested in the intersection of science, art and childrens books. Check it out here.

Its been a little while since I’ve done a second-hand book finds post (the last one was in March)- and I’ve found quite a few lovely illustrated books over the last couple of months so I thought it was time for another round-up post.

I found all of these books at my local $1 book sale, which is run to raise money for the Lion Foundation. It is a treasure trove for people who love books- especially old ones 😉 Most of the books mentioned below are full of wildlife illustration, but I also find lots of art instructional books (too many to post about now!).

Here are my favourite finds of late….

END_OF_DOCUMENT_TOKEN_TO_BE_REPLACED

or perhaps I should have called it ‘the mock-up poster’ because this was sort of a quickly put together version of my puriri moth lifecycle for a portfolio submission. I’d like to add to it by doing a fully painted background at some point and adding in text of course. 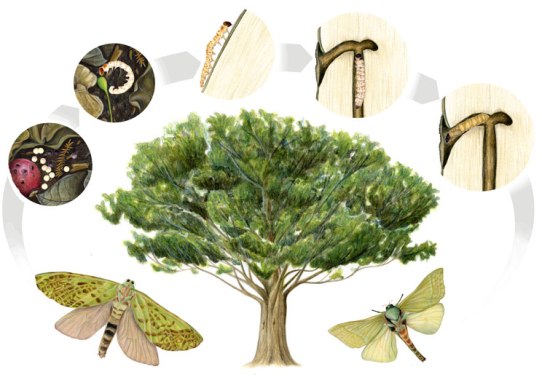 the tree+backgrounds to the various larval stages are watercolour+coloured pencil, the insects themselves are coloured pencil only.

Its Puriri Moth season again in NZ- I’ve only seen one this year though- much less than last year!

I hope your weekend has got off to a great start!

I tried out splattering the background with watercolour to get a dirt-like effect and after I was done realised that I’d splattered tiny paint drops all over my walls…oops. Lucky it was an easy clean up!

Don’t forget- you have until Monday 5pm (NZ time- Midnight Sunday EST) to enter the skillshare giveaway for 1 months premium membership! There are only 2 entries so far so you’re chances of winning are high if you enter 🙂 The classes are really awesome- lots of new ones have recently been added including Vintage Hand lettering by Mary Kate McDevitt and Drawing Daily Monsters by Stefan G. Bucher- which I am really keen to do. Get your entries in!!

Enjoy the rest of the weekend,